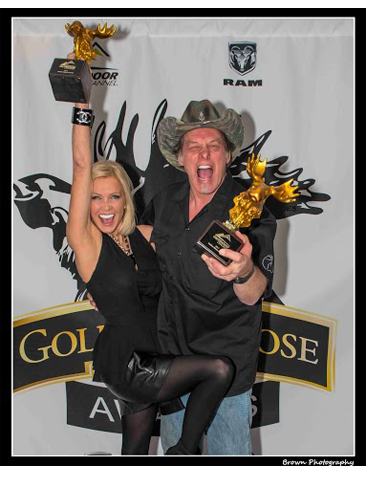 Vegas….The lights, the liquor, the shopping, and if I was a gambler I suppose that would be amazing too. After having lived in the city that doesn’t sleep while Rocco attended basketball training at the world famous Tarkanian Center, I got used to having the best meals and shopping every day.  I miss that.  Barney’s, DVF, Christian Louboutin, Sushi Samba….there is so much to see & do.

This past week we attended the S.H.O.T. (Shooting Hunting Outdoor Trade) show in Vegas and thoroughly enjoyed a little indulging.  Who wouldn’t?  Everyone seemed really excited to actually see some of the clothes from my new clothing line, Artemis Camo Couture, and especially the jewelry!! (Can’t wait til that launches later this year!)  It was great to see old friends and meet so many supporters. Ted couldn’t walk 5 steps without people stopping to thank him for standing up for Second Amendment Rights. It really was adorable.  Everyone wanted just “one more picture” with him.

We almost felt like movie stars walking the red carpet at the Outdoor Channel’s Golden Moose Awards.  Ted and I congratulated Duck Dynasty’s Kori & Willie on their success & chatted with actor-turned hunting host Joe Montegna, and so many others.  Winning the Golden Moose Award for Fan Favorite Host (again!) for our Ted Nugent Spirit of the Wild TV show was incredible! To know that the public voted on that award made it extra special too. But a highlight of the week was when Ted performed Cat Scratch Fever with fellow musicians Big & Rich, & of course Cowboy Troy. So much fun!

And then, less than twenty-four hours after we returned to Texas, our production team (Ted, me, and editor Ben Ranzinger) are already hard at work reviewing new shows and making a few exciting changes for the 2013.  Back to work.  Back to reality.

Off Guard (in production)

Determined to escape his father’s stranglehold, 17-year-old Cash Warner enrolls in an inner-city school – known for gangs and violence – to have a shot at a basketball scholarship. Based on a true story. (in Development 2017)