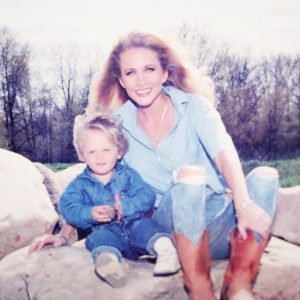 There are many lessons to learn from our own mothers and from other mothers, too. Most importantly, we discover the kind of mother we’d like to be if we were blessed to have children of our own. In my 54 years on this planet, I’ve seen a variety of parenting styles, and even, sadly, lack of parenting. It only makes me appreciate the incredible sacrifices made by my mother, and the lessons I learned from being a mother.

I’m blown away by working women who raise two, three, even more children without a staff and without losing their patience. Certainly, there are times that we all lose our composure. When my son was just a baby and we were on a plane trip, he was cranky and it’s no wonder. It’s not natural for babies to be in confined areas, have their ears pop from the air pressure change and want to be in their comfy cribs rather than surrounded by strangers. My child had to be changed so I created a make-shift diaper station on the floor in the aisle of the 757 jet. During that, um, procedure, my infant decided that was the time to urinate. Let’s just say the people nearby weren’t all that elated. We all try to do the best we can. There’s no foolproof handbook for mothers. Ask four moms how to potty train and you’ll most likely get four different answers.

Many mothers desperately try to shield their children from disappointments and injustices, from hurt feelings and scraped knees. When Rocco was seven years old, I enrolled him in the YMCA swimming program. In my youth, I had been a state champion swimmer and wanted to make sure I passed down that trait. I gave my son a few extra tips and put him in the hands of a competent and successful coach. After a few months of practice, we entered Rocco in a Novice swim meet. It was an opportunity for children who had never swam competitively to learn about the rules and procedures of a swim meet. It was exciting for me as a mother, to watch my son go through the anticipation and excitement leading up to the race. When the kids were called to get on their starting blocks, my stomach did a flip-turn and my heart thumped thunderously in my chest, as if I was the one to swim for the first time. An official called the children to attention with a loud and deafening command that I had heard many times before, “Swimmers, take your mark…” and then came the powerful sound of the starter gun blasting.

The stands were filled with anxious parents and grandparents hoping their kids would be the one to come home with a first place trophy, but there could only be one. Rocco’s reflexes were quick and he attacked the water with the skill and command of an older, more experienced athlete. The joy and elation I felt watching my son follow in my footsteps – or strokes – was both exhilarating and tense.

Was he swimming too fast to keep that pace for two laps?

So many things raced through my mind…

Maybe he should have had eggs instead of cereal for breakfast.

Wow! He could actually win!

Rocco’s drive and determination during his months of practice paid off, big time! Before a couple of kids even made it to the end of the first lap, Rocco finished the second lap and won! To see the smile and joy on his face was priceless. It was an achievement that could give him the confidence to continue swimming, and set him up to succeed in other areas of his life.

The elation, however, was short-lived.

After the race was over, Rocco’s coach and other swimmers congratulated him on his first place win, but when we went to pick up his trophy, we were severely disappointed. Although there was no denying that Rocco finished first, he was not given the first place trophy or any trophy. The reason we were given was quite unfair and unjust.

“Rocco swam too fast and it wasn’t fair to the other children,” said the official in charge.

Instead of coming home with a trophy and the confidence that his hard work paid off, Rocco was given a stack of comic books. Seriously.

Part of me wanted to scream and yell about the injustice of it all (ok, truthfully, I did a little). Here was a child who followed the rules, he had never swam competitively, but just happened to be better than the others. Apparently being too good was unfair to the kid who came in last.

…is one of the many things I learned from my mother. She taught me how to be kind and compassionate, to give to others when they are in need. I remember visiting my grandfather who had Parkinson’s disease. My mother would take off his shoes and rub his feet. She was and is always available to help a friend move or to plant flowers for someone or to be a cheerleader in the stands at my swim meets. She taught me how to be a mother, and for that, I am eternally grateful.

Happy Mother’s Day to my mother and all the moms who give so freely of their time to their children and who constantly remind us of what it means to love unconditionally.