Married to a Rock Star 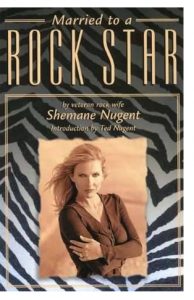 “MARRIED TO A ROCK STAR” is a wonderful book celebrating a timeless love story. Shemane Nugent writes of her marriage to Ted with insight born of the tests of character between two successful people. As I’ve stated before, Ted is one of the good guys, and Shemane has made him better.”-Charlton Heston

“After reading “Married to a Rock Star” you will have a renewed sense of the morality and faith that underlie the important institution of marriage. Shemane shares a personal journey that will resonate with those committed to finding ways to make their relationship work. I recommend it for that, and for the fascinating glimpse behind the scenes of the world of rock stars”–Sean Hannity, Hannity and Colmes, MSNBC