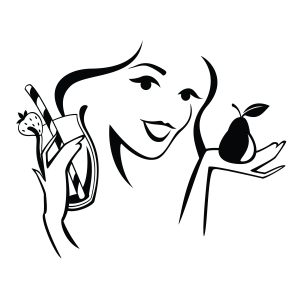 Vegetables are a must on a diet. I suggest carrot cake, zucchini bread, and pumpkin pie. —Jim Davis

I have a confession to make: I didn’t always eat healthy. There were times when I was thirty pounds heavier than I am today. Though we had fancy dinners with crystal and china every Sunday after church, we were often served Hamburger Helper, chicken pot pies, and frozen dinners. During junior high and high school, I would frequently have a peanut butter and jelly sandwich, a bag of chips, and two Hostess cupcakes. I was involved in many sports and sometimes called “healthy” or “big-boned.” Growing up, my nickname was Shelly. Occasionally, kids called me “Shelly with the big, fat belly.” I prayed I would be as skinny as the models on magazine covers.

It wasn’t until I reached voting age and my high school sports were well past that I understood the affect food has on our bodies. Exercise and healthy eating are responsible for overall health and wellness. Yes, genetics plays a role. I’ll never be five eleven and a hundred and ten. For one thing, I like to eat. But I’ve figured out how to maintain my body weight and size for thirty years. Except for last year.

After having a hysterectomy to remove a four-inch tumor, I was feeling tired and had gained ten pounds. I knew all the tricks about how to lose weight but still didn’t know what to eat to fuel my body properly. I had become an international Zumba fitness presenter who had taught thousands of instructors from Australia to London and all over the United States, but I was worried my stamina had gotten up and run away.

So I tried something new: for one week, I ate mostly vegetables, and those were mostly raw. I had a palm-sized portion of fish, chicken, or venison every day, some healthy fats such as avocados and olive oil, nuts, and a small portion of complex carbs such as quinoa. My energy shot through the roof! I was back in the game. Unstoppable! I felt better than I had in years. My cravings for sweets diminished too.

If only for today, plan your meals around vegetables. We seldom eat enough of ’em, and yet the green stuff is the most nutrient-rich food with which we can fuel our bodies.