An ambassador for healthy living, Shemane Nugent has been a group fitness instructor for more than 30 years. She is a motivational speaker, author, award-winning TV producer and host, filmmaker, and is passionate about helping people make a positive impact on their health and overall well-being. She has appeared on MTV, Vh1, Discovery, CMT, C-Span, FOX, and many other national television and radio shows.  Shemane got her start in media as a radio newscaster in 1980. 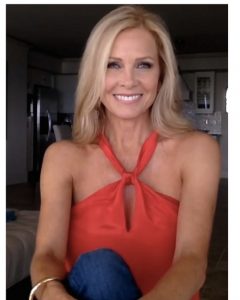 After discovering her home, which was once featured on MTV Cribs, was contaminated with toxic mold, Shemane developed a life-threatening illness.  She took a year off from teaching group fitness classes and focused on regaining her health.  How she healed herself and her family through alternative remedies is miraculous!  Once dependent on oxygen and barely able to walk,  Shemane has fully recovered and is now an international Zumba® fitness presenter who is on a mission to share her passion for healthy living with others. She  developed Zumba® in the Circuit for two of the top ten fitness franchises, Curves® and Zumba®, and has written training manuals and starred in training videos for fitness instructors.

With a Bachelor’s degree in Radio/TV and Film, and a Master’s degree in Metaphysics, Shemane is taking her passion for helping others to the Internet airways at her website shemanenugent.rocks where she shares her honest views about spirituality, faith, family, fitness, fashion, politics, healthy living and her twenty-seven year marriage to rock ‘n roll legend Ted Nugent. 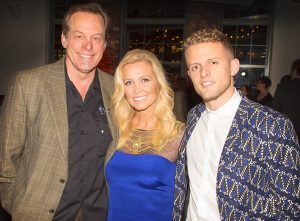 Shemane and Ted created a charity called Freedom’s Angels, which helps wounded soldiers and their loved ones. They also serve on the board of directors for Operation Finally Home, an organization which provides mortgage-free homes for veterans. Their support for the military and a love for dogs prompted Ted and Shemane to partner with K9s for Warriors, which trains shelter dogs to assist veterans suffering from Post Traumatic Stress Disorder.

When she is not teaching fitness classes or helping with charitable causes, Shemane enjoys writing books and screenplays. She wrote ‘Married to a Rock Star” (Lyons Press), and a wild game cookbook she co-authored with her husband, “Kill It & Grill It” (Regnery).  Her 3rd book “4 Minutes A Day, Rock ‘n Roll Your Way to HAPPY” will be published later this year.

Shemane is producing a film that she wrote about her son, Rocco, who is the light and joy of her life.

Here’s a little info about my life and my passions.  First, my name is Shemane.  There’s no “r”.  It comes from the movie “El Cid” with Charlton Heston (check out his book comment to me!), and Sophia Loren.  My parents got creative and named me after Sophia Loren’s character, which is spelled much differently in the movie.

Michigan is my home state.  I grew up in an average Midwest town.  We had a river in our backyard, and my brother, Guy, and I swam pretty much every day in the summer.  At the time, he probably hated it but I wanted to do everything he did.  So, I climbed trees, raced motorcycles, and swam competitively.  Compared to my big brother, I was just “okay”, but I won over one hundred medals, ribbons and trophies for athletics and was a state champion swimmer twice. 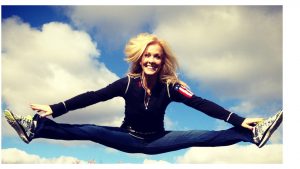 Continuing the athletic saga in high school and college, I became a gymnast and a cheerleader.  Like many, I packed on the Freshmen Fifteen (pounds) and then worked out til I lost it.  Just about that time, “aerobics” became the new exercise craze.  Yes, I was a proud owner of leg warmers and a thong leotard.  Somewhere, there is a video of me teaching probably one of the first group exercise classes on cable TV ever!  The big hairstyle alone will scare you!

My college degree was in Radio, TV and film.  My first job was as a newscaster for college radio, then as sports reporter for COX cable in Gainesville, Florida, covering the Gatornationals.  Little known fact:  For my senior class project we had to make music videos.  At the time, there was also a contest on MTV to make Madonna’s video.  I decided to do both. Out of thousands of entries, my video was one chosen to air on MTV (3 times! Not that I counted). My professor, who was typically tough (especially on women) gave me an “A.”

Upon graduation, I got a job as a radio traffic reporter for a rock ‘n roll radio station in Detroit.  The only thing my brother and I didn’t have in common was that I didn’t really like rock ‘n roll music.  Whereas, he’s been wearing concert t-shirts for forty years.

Only a month after I started working as a traffic reporter, with my desk nestled next to that of 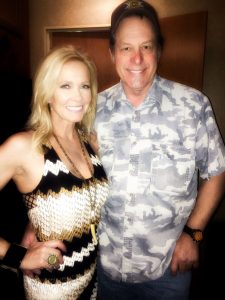 author Mitch Albom, Ted filled in for the morning crew for an entire week.  On radio, your job is to talk – a lot. For four hours a day, I got to know Ted Nugent. He was funny, witty, didn’t drink or smoke and seemed to be a doting dad to daughter Sasha and son Toby. Still, Ted asked me out and I said no. My boss asked me to reconsider, and always the team player, I complied.

My dreams of becoming the next Diane Sawyer were crushed, but I utilized my skills filming Ted’s hunts long before outdoor shows were prevalent.  For two decades, we have co-hosted and co-produced the award-winning television show “Ted Nugent Spirit of the Wild”, now on the Outdoor Channel.

But the road to happiness is often filled with potholes. 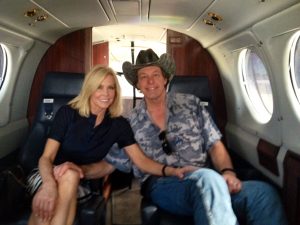 Ted and I have had some pretty substantial obstacles to tackle.  In my book “Married to a Rock Star,” I chronicle some of the trials and tribulations we’ve endured.  It hasn’t been easy.  No marriage is. And like other marriages, I don’t always agree with everything my husband says or does.  But I’m learning to find my voice, which is a pretty big deal for me.

The emotional challenges were minimal, however, compared to losing our health.

We discovered our MTV Cribs home was contaminated with toxic mold in between the walls.  Over a course of two years, my health deteriorated.  Debilitating migraines plagued me daily, as did chronic fatigue and insomnia.  Ted and Rocco had similar symptoms too.  Doctors told us our problems were stress related, which seemed quite possible.  There was something more though.  My investigative skills finally paid off…a little too late. Ted and I had four different types of mold in our blood stream.  Rocco had severe asthma and  I was diagnosed with having pre-emphysema.  We destroyed our home and moved to Texas where I could be near a medical facility that dealt with toxic exposures.

It was a year before I could even consider exercising. I discovered Zumba® fitness and it changed 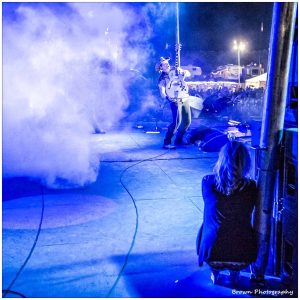 my life immensely.  I regained my strength and stamina and found a workout that was both fun and effective.  It came along at the perfect time, too.  Rocco graduated high school and left home to pursue his dreams. It filled my heart with so much joy to spread my love for fitness and health with so many others.  I have been blessed to be able to develop programs for Zumba® and travel the world doing what I love.
Never a dull moment, my mother always says.  I have trouble with finding a novel that’s more exciting than my life. Oh yes, and that’s another activity I enjoy….writing. Writing takes me away from some of the trying times. My imagination is vivid and endless. I’ve written three screenplays, one of which has been optioned by my son’s production company.  And there’s nothing more I’d rather do than spend time with my son.