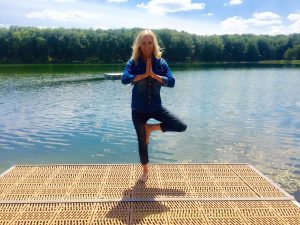 One of the most basic yoga poses is called Tree Pose, but on this day, for me, it was incredibly difﬁcult.  I can do advanced balances with one leg in the air behind my back, but for some reason I could not stop wobbling in Tree Pose. I fell. I tried again. I fell. There are times in life when we wobble before we get to our destination. We oscillate. We are off balance. The most important thing is that we get up and attempt the endeavor again.

There are many stories of celebrities and wealthy individuals who have tried only to fail. Michael Jordan was cut from his high school basketball team. Now he is one of the most recognizable basketball players in history. Sarah Blakely founder of Spanx, had the idea of bringing a better, more ﬂattering way of living to women. She brought her idea of slimming panty hose to several businessmen who didn’t understand how important it is for women to feel good and look good as well. She was turned down many times before she became a billionaire selling women’s hosiery.

Just because someone else has tried something doesn’t mean that you can’t do it better. Finding your own special niche to improve a product or service can be the saving grace to many people and help you become more prosperous, too. If you’ve wobbled around at one thing or another and have been unsuccessful at keeping your New Year’s Resolution to look and feel better, have no fear.  Don’t give up.  If you’ve overindulged or failed to even get started on your goals, tomorrow is another day.

Trying to lose weight and get in shape, learn a new language, clean out your closets, or start a new career, may seem overwhelming. You might wobble; you might fall. You might even think it’s too late to get started. Sometimes it’s in those difﬁcult times, or the Dark Night of the Soul, where we ﬁnd our strength. We wouldn’t know light without darkness. We wouldn’t know health if we had not been ill. We might not recognize what success is without failure.

Yoga instructors remind us of a simple technique when we are wobbling in a pose. Breathe. This morning in yoga class, I did just that.  I must have looked ridiculous keeling over time and time again in Tree Pose, but I kept trying. I took a deep breath and focused.  Finally, I was able to hold the pose.

When you are struggling to stay on track with your career, weight loss goals or ﬁtness plan, know that faltering is part of the challenge. Take a moment to live in that uncomfortable space.  Relish the challenge. It is the very thing that will make you appreciate success.

Follow her on Periscope for daily LIVE broadcasts where you can ask her questions or just say hello!  http://www.periscope.tv/ShemaneNugent